As said in my previous posts, I had got a big bunch of nugge soppu & wanted to try all the recipes taught by my aunt. I tried 2 of the recipes shared by her.. nugge soppu tovve & nugge soppu rotti & it was super-duper hit at our home. My husband suggested me to prepare more dishes using this soppu. I was on cloud nine after those comments & started dreaming about the next recipe & the comments that I could receive from him!!! But, when I saw the remaining soppu, I was a bit disappointed as I had very few left with me. I could just manage with just one more dish :-p 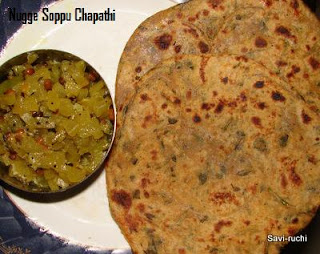 Email ThisBlogThis!Share to TwitterShare to FacebookShare to Pinterest
Labels: breakfast, no garlic, no onion, Nugge, paratha