The name mulka makes my mom-in-law nostalgic. She starts recalling past days & she brings those memories in her words to us(particularly to her daughter-in-laws). She starts something like this, my son did his high school & pre-university in Manipal & as a result he had to stay away from me. But, when we went for selection for engineering seat, I had made up my mind that my son will be with me. So, it was me who decided him to study here & he was traveling a short distance(?!) of about 40kms everyday to reach his college. Later, she starts with his favorite food & cooking under 10mins dishes.


"I used to cook godi dosa (wheat flour dosa) along with chutney, avalakki upkari (beaten rice upkari), neer dosa & simple breakfast items to him. He used to sometimes leave home as early as 6:30 to 7:00a.m. He was not carrying lunch & he used to be back only by 5:00p.m or sometimes 6:00p.m. He did not like eating rice & I used to prepare golibaje or mulka for him every day evening."I get impressed by this, everyday golibaje or mulka?? Wow!!.

She continues, "his friends used to like the coffee & mulka that I prepare & used to tell me that, they came home just to drink the coffee & mulka that I made". There ends her flashback.
I have to accept that, my mom-in-law makes amazingly nice coffee & the best ever golibaje & mulka. Later because of health problems, the frequency of golibaje & mulka preparation reduced at home. Even now, if a guest visits our home, the first option for her is golibaje, mulka & coffee.

I knew that for mulka we need wheat flour, bananas & other ingredients. I did not have bananas at home, instead had a packet of jackfruit. I had bought jackfruit to prepare Mangalore buns & post it to AFAM:Jackfruit hosted by LG. I called my mom-in-law, confirmed if I could prepare mulka with jackfruit & went ahead preparing.

The first batch sticked to the pan, it made me really sad. Later realized, it could be because of the sugar I added to it. Also, the oil was not very hot. So, I heated the oil properly & then made the next batches, it turned out good. Here ends my long & interesting (boring??) story. 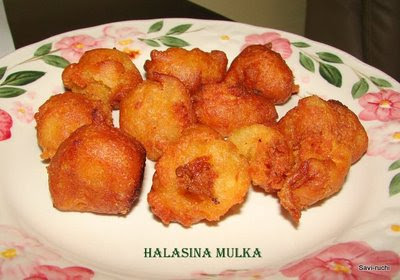 Method:
This recipe goes to Asankhana’s event “ Create With Luv for Luv“ as it is my hubby’s favorite & I cooked it for him. 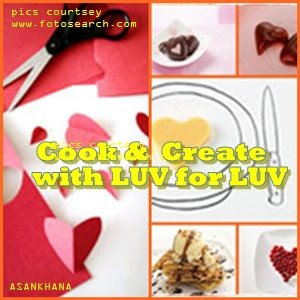 Along with the above recipe, I’m sending the whole bunch of jackfruit recipes at my blog to AFAM:Jackfruit hosted by LG & to Maheshwari's blog. Here goes the entries..