Let me tell you my story about this podi. I'm married to a person who belongs to South Canara District, Karnataka, India. His mother tongue is Tulu & I dont understand that :( But, in my in-laws house, they normally speak Kannada ( a regional language of India). I face a lot of problem (even now!!)when I go to his village, as they dont speak Kannada. Meanwhile, let me tell you.., podi means bonda/bajji or pakora in Tulu.

First time when I went to his village, I was amazed to see the variety of food prepared there. Even though I ate most of them for the first time, they tasted so good & felt like eating again & again. I can never forget the halasina kayi dose (raw jacfruit dosa)!! I'm missing them :(( After going there, I started eating lot of leafy vegetables like ondelaga(Alternate Name: timare, English : Brahmi) & kesuvina yele(English: taro leaf, colocasia leaves). Their food preparation was quite interesting & was amazed at the variety of items they prepare. Some of them to name are patrode (made from kesuvina yele), jee gujje podi ( breadfruit bajji/pakora), jee gujje idli, nendra bale hannina jamoon ( A sweet dish made from banana), timare tambli(brahmi tambli), karjoora barfi (a sweet made from dates). Aren't they sounding yummy?? I'll try to learn the recipe of each of them & try to publish.

Seems like, I'm lost in those memories.Let me come back to bendekayi podi...
I attended a Brahmopadesham function in his village & when they were serving the food.., they said...., podi.., podi. I didn't understand what it was" ??? " & said " no" to that. My husband's aunty who was sitting next to me suggested me to taste that as it was a different kind of pakora/bajji. I ate it & then realized it is ladies finger pakora :)) I had never heard or tasted before this pakora.It was sooooo tasty that I fell in love with it. I asked few of his relatives for the recipe but.., didnot get any response. Finally, I got the recipe..........., I was so happy that I tried it on the very next day & it turned out to be a disaster.

Relax ...., dont be shocked. I'm not posting that disaster recipe here. I have learnt it quite well now & here goes the recipe. Do prepare & enjoy eating!!. Dont forget to post me a comment..,after eating. 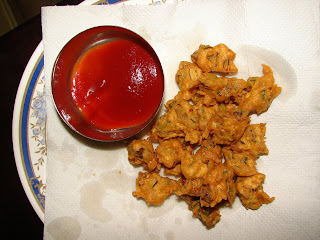