Let me bring out the difference between palya & gojju. Palya is the dry or sooka sabzi, something similar to stir fry. After entering the blog world, I got to know palya(Kannada term) is known as thoran in Malayalam. Gojju (Kannada term) is something similar to ‘vegetables in gravy’ or in general known as “Curry”.
Usually for any palya recipe, the tempering is done followed by stir frying the vegetables in water or oil until the vegetables are soft. But my mom never prepares palya this way. She always boils the vegetable in pressure cooker (may be 1 or 2 whistles depending on the vegetable she is cooking) & then adds tempering to it. During my initial cooking days, I used to fight with her for stir-frying the vegetables in oil or water for more taste, but she always smiled & refused to do so. I never understood why she was oblivious about my proposal. Even she failed to convince me, partially due to my ignorance about intricacies of cooking. 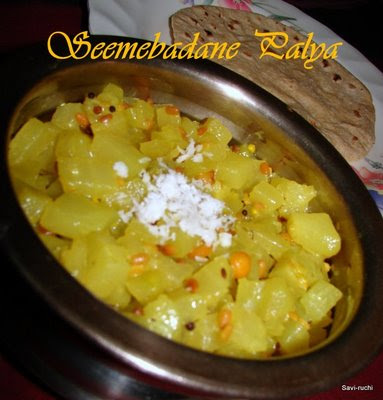 This along with Tomato-Onion Gojju goes to "WYF : Side dish" hosted by EC